It looks like a Bass, for the most part acts like one, which is probably why everyone calls it a Peacock Bass but it’s not a bass, it’s a Cichlid.   This is the first piece of critical information for prospective anglers; Know precisely what fish you’re after.  We’re honored to put this article together for the Heroes on the Water Southwest Florida Chapter event targeting Peacock Bass in Collier County FL coming up soon.  We hope you find the following entertaining and educational. 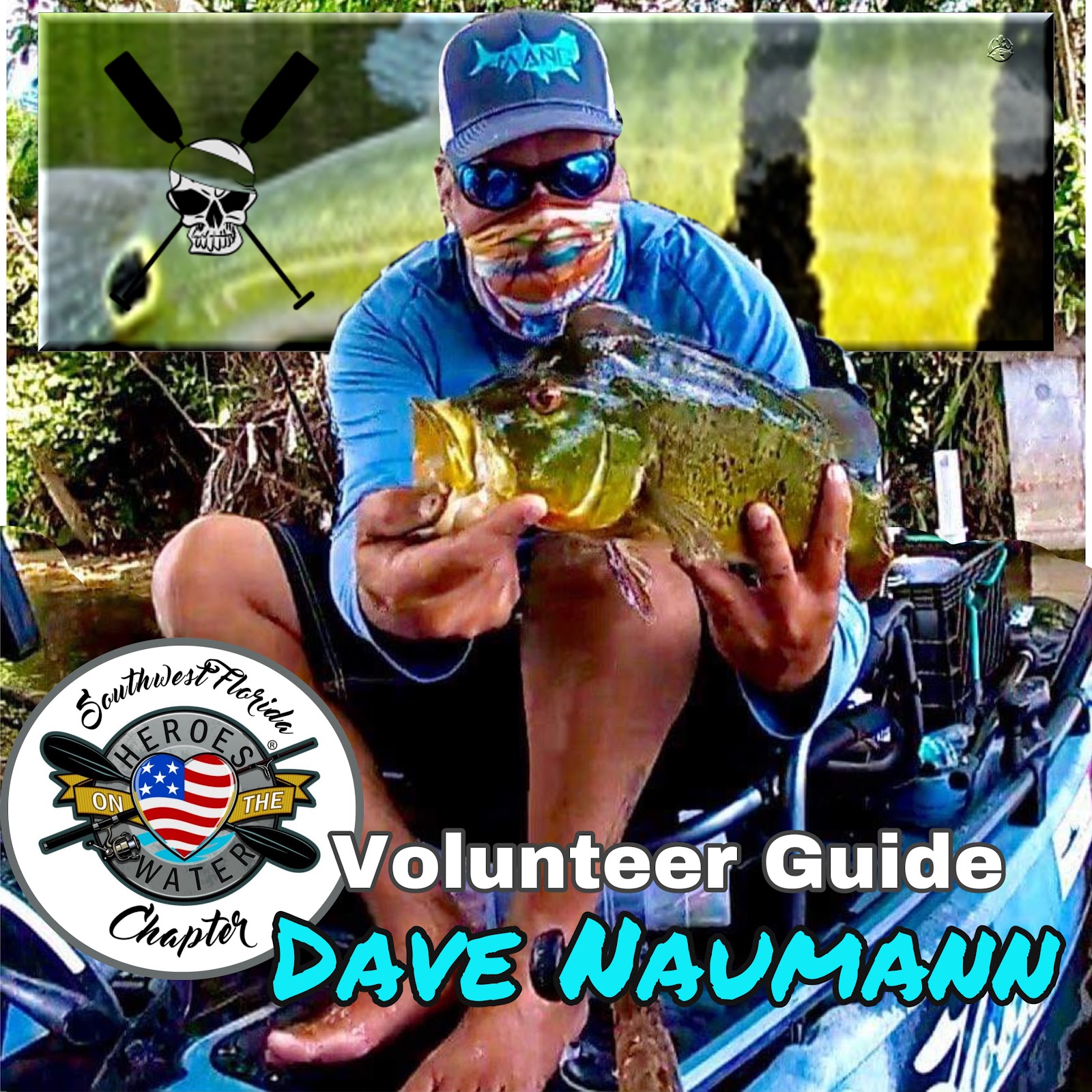 The Cichlid Family (Cichlidae) — All species of peacock bass belong to the genus Cichla, within the family Cichlidae. Cichlids are among the most successful of freshwater fish families with over 1700 species on four continents. From a scientific perspective, they are an amazing family. Known for their astonishing species radiation in African lakes, they are an important research focus for evolutionary biologists. Their reproductive behavior is among the most complex and diverse of all fish species, and their specialization into extremely varied feeding niches is remarkable. But anglers know where they are really extraordinary ... and that's on the end of a fishing line. Like no other freshwater fish in the world, peacock bass are the ultimate in violent strikes and sheer fighting power.  There are currently 16 different recognized species of peacock bass (Genus: Cichla).

Cichla temensis (Speckled or Giant Peacock Bass) is the largest member of the peacock bass genus. Its violent behavior and awesome tackle-busting power is the primary attraction that brings avid sporting anglers to the Amazon. This top level predator is considered by many to be the most powerful freshwater gamefish in the world.  We wish we were taking a trip to the Amazon but we’re fishing the Florida variety of Peacock Bass, Cichla ocellaris.  Still an amazing brawler in it’s weight class and as far as domestic geography the only place to find them in the United States is South Florida. 'LUKANINI'—CICHLA OCELLARIS  —( BLOCH & SCHNEIDER 1801 ) is the subspecies of the Peacock Cichlid “Peacock Bass” found in South and Southwest Florida freshwater canals.  This species will be our focus.

Cichla ocellaris is a warm water species natively found mostly in northern Guyana shield drainages. It only occurs in the upper Rio Branco (Tacutu and Urariquera) in Brazil.  Not very tolerant to colder waters, it has been successfully transplanted to Florida where it was hoped to help control the invasive population of Mayan Cichlids, that was disrupting the natural eco system in South and Southwest Florida.  The largest sub species of Peacock Cichla, the giant peacock bass: Speckled Peacock or Cichla temensis was also introduced to South Florida but did not adapt well and is now rarely seen.

In Florida specifically the Peacock Bass is generally restricted to deep canals and their adjacent lakes.  Those waters have depths where the temperature never falls below the Peacock’s tolerance level, even during the occasional freeze.  Like the Largemouth Bass that share its waters, Peacocks usually stick close to grass or other structure.  While targeting Peacock Bass in these waters, you’ll also usually find freshwater Snook and even Tarpon frequenting the same areas. Basslike shape and large mouth with underslung jaw.  Very colorful - green to black dorsal surface with yellow or cream-colored sides either white or bright orange belly depending on season and spawning phase.  Cichla ocellaris has 3 distinct, short or blotchy vertical bars, abdominal bar and ocellated blotch in rearmost bar.  No black markings on the operculum (cheek).  This species always has one large spot with a white or yellow margin (the “peacock eye”) on the upper lobe of the caudal fin.  Large males have a pronounced hump forward of the the dorsal fin once they reach sexual maturity.

Juveniles: up to about 8 inches  Adults: generally max out around 20-22 inches.  Average weight is around 1-2 pounds where lunkers are considered 5-9 pounds.  World record in these genus 10lbs 8oz; Florida record 9.08 lbs.


Game Qualities:  The Peacock Bass is considered by most the strongest freshwater gamefish in the world.  Hard striker and strong, acrobatic fighter.  Easily considered a better fight than Largemouth or Smallmouth Bass of equal size.  As an added bonus for Anglers who like their sleep, Peacocks do not like to bite early in the morning or late at night.


Peacocks are aggressive, relatively large, diurnal (active in daylight) predators.  They are primarily piscivorous feeders and are pursuit hunters. That means their target is fish and once they decide something is food, they’ll run it down halfway across a lagoon if they have to.  Light spinning and bait casting tackle with 15lbs test line will get the job done.  Fly weights should aim in the 6-8wt class.


Live Shiners are a sure bet.  These baits are like candied bacon to peacocks, largemouth, and many other freshwater predators.  If you don’t want to support a local bait shop that carries Wild Caught Live Shiners, you can catch shiners with sabiki rigs tipped with bits of earthworms or dough balls.  You can also easily cast net them by chumming around grass or lily-pad beds.  We recommend the The RFA Shiner rig for deploying these highly effective baits. 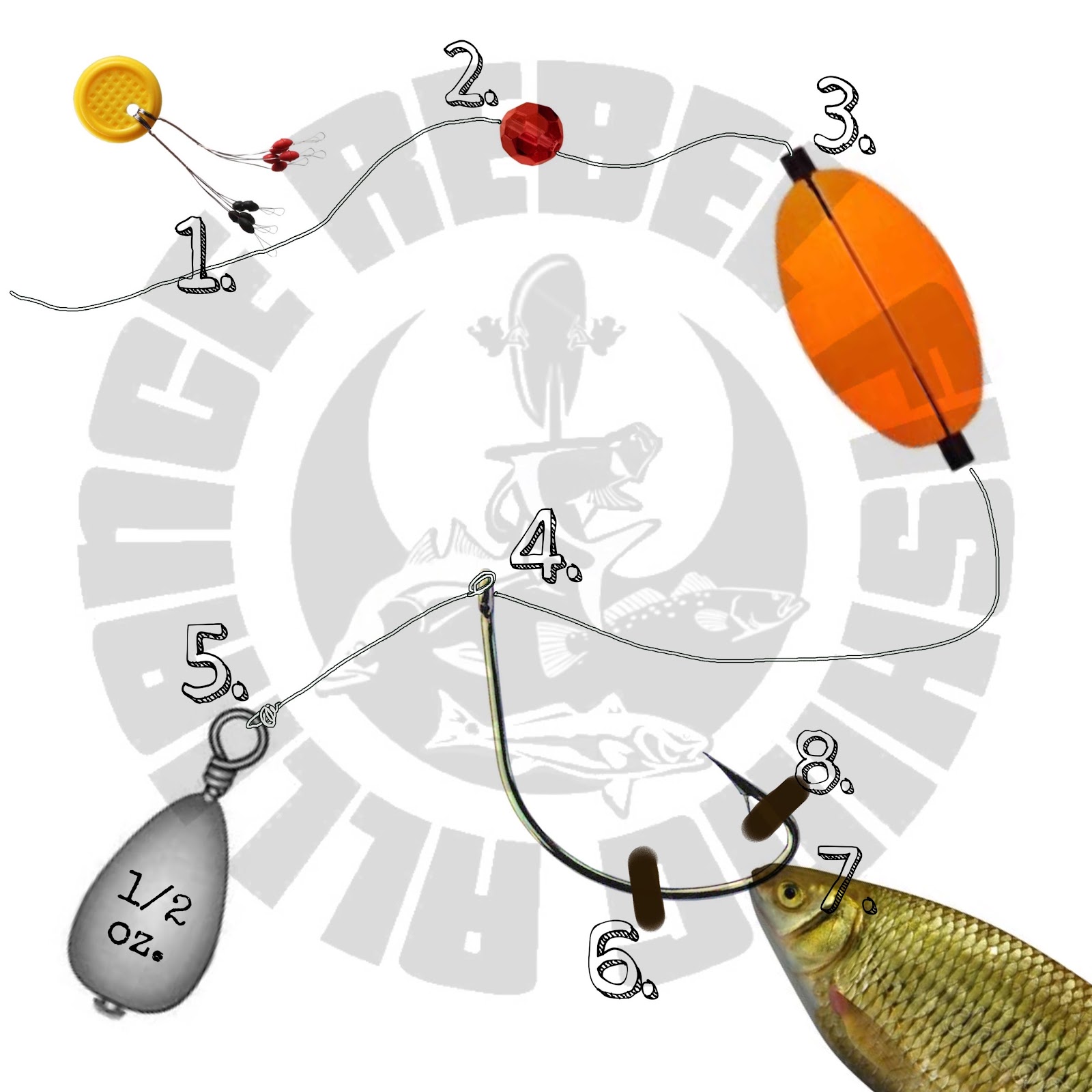 Also remember we told you that Peacocks were introduced to south Florida to help control the invasive Mayan Cichlids.  That being said juvenile Mayan Cichlids are another logical and effective live bait option.  They can easily be caught using sabiki rigs tipped with bread balls.


Regardless of the live bait, make sure you have an adequate vessel to keep them alive.  You will need properly aerated water to keep whatever bait you choose healthy and lively.  While fishing from shore or a kayak we recommend the RFA Rope Handle Bucket & Aerator Combo as an easy and affordable portable live well.


For artificial bait as in any environment you want to “match the hatch”.  Peacocks don’t seem to respond too well to traditional bass baits like stick baits or creature baits (Probably because they’re not bass).  As you may recall, Peacock Bass are piscivorous (fish eaters) so you want to match an artificial lure to the native species the predators will generally be feeding on.  In this case: shad, shiners, mud minnows, and juvenile cichlids.  The more erratic, commotion producing, and flashy the lure is the better.  We recommend colors that mimic juvenile peacocks, mayan cichlids, or golden shiners.


Here are lures we suggest (in no particular order): 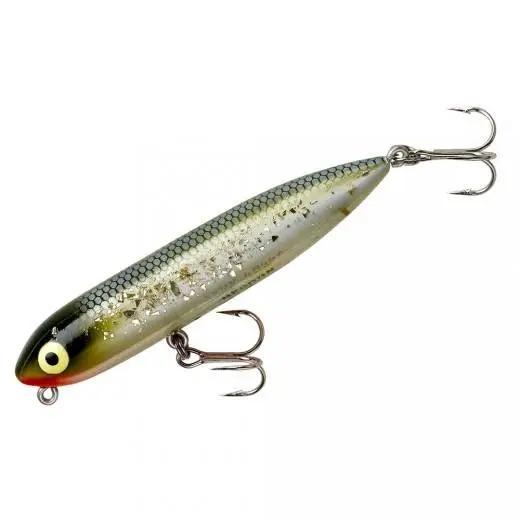 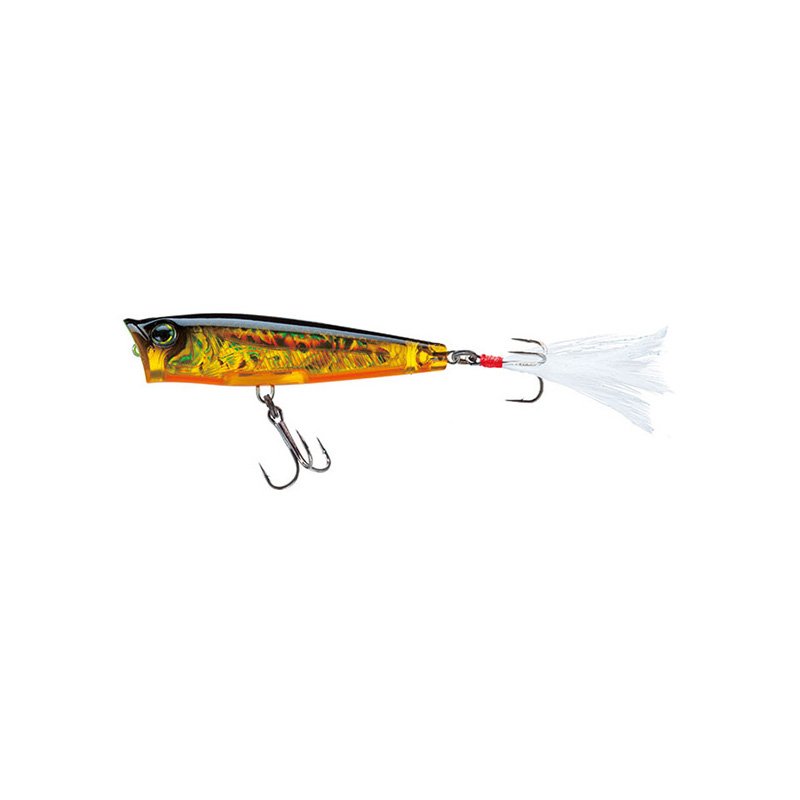 Yo-Zuri® 3DS Popper in Golden Black  This lure has a prism finish that we feel mimics a golden shiner with the orange belly and popping cup that produces a lot of irregular action and commotion on the surface.  Followed by a feathered chaser with tinsel strip that mimics injured bait fish scales, this option is sure to lure a peacock from any haunt for a spectacular top water blow up! 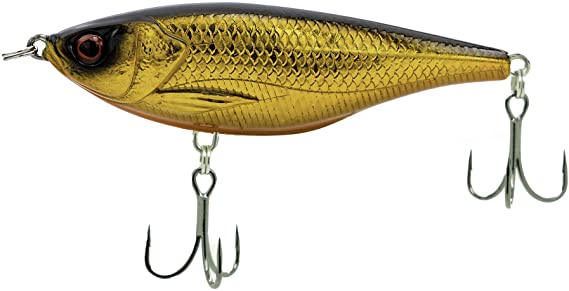 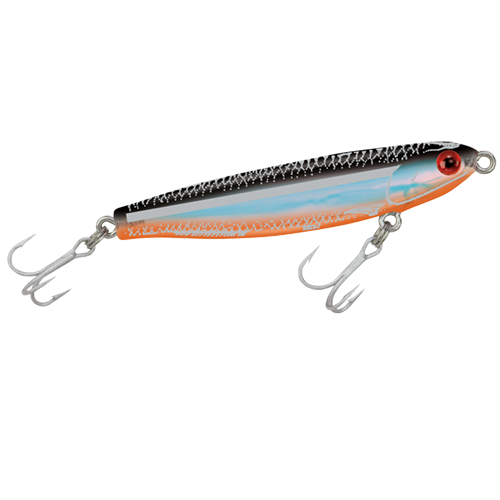 Mirrolure 9MR Suspending Twitchbait Color 808 Suspends at depths of 1-2ft, darts from side to side while emitting a sonic fish calling sound.  Ideal for fishing shallows or near the water’s surface.  Color 808 mimics a juvenile Mayan cichlid with the dark black back and orange belly but still the luminescent silver side for some flash! 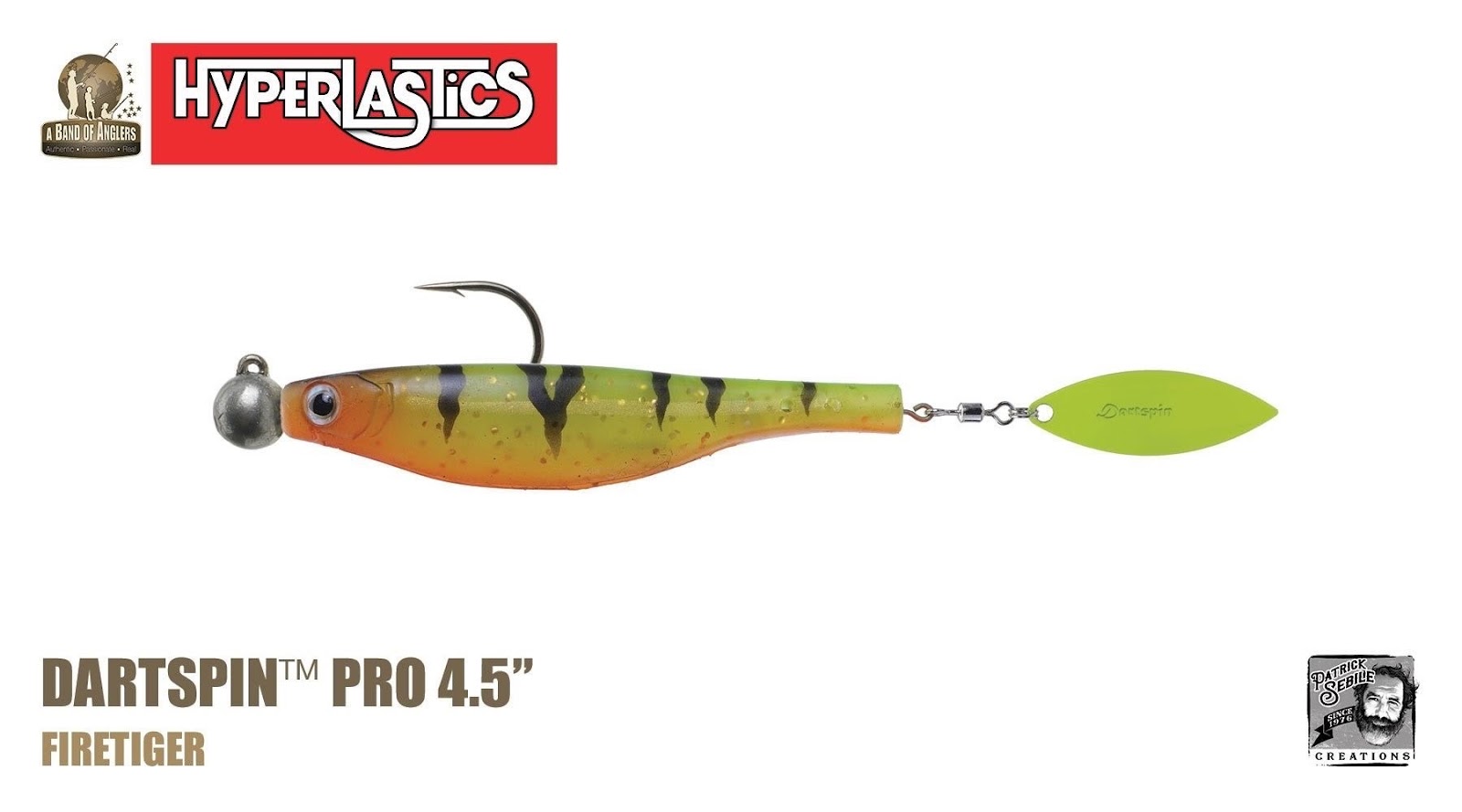 Hyperlastics™ Dartspin™ Pro, a highly versatile minnow-shaped lure that closely emulates a fleeing baitfish, complete with flickering tail. Whether you swim it, twitch it, jig it, or even troll it, the Dartspin Pro's trailing willow blade darts and flashes to call fish in.  The fire tiger color mimicks a juvenile peacock bass! 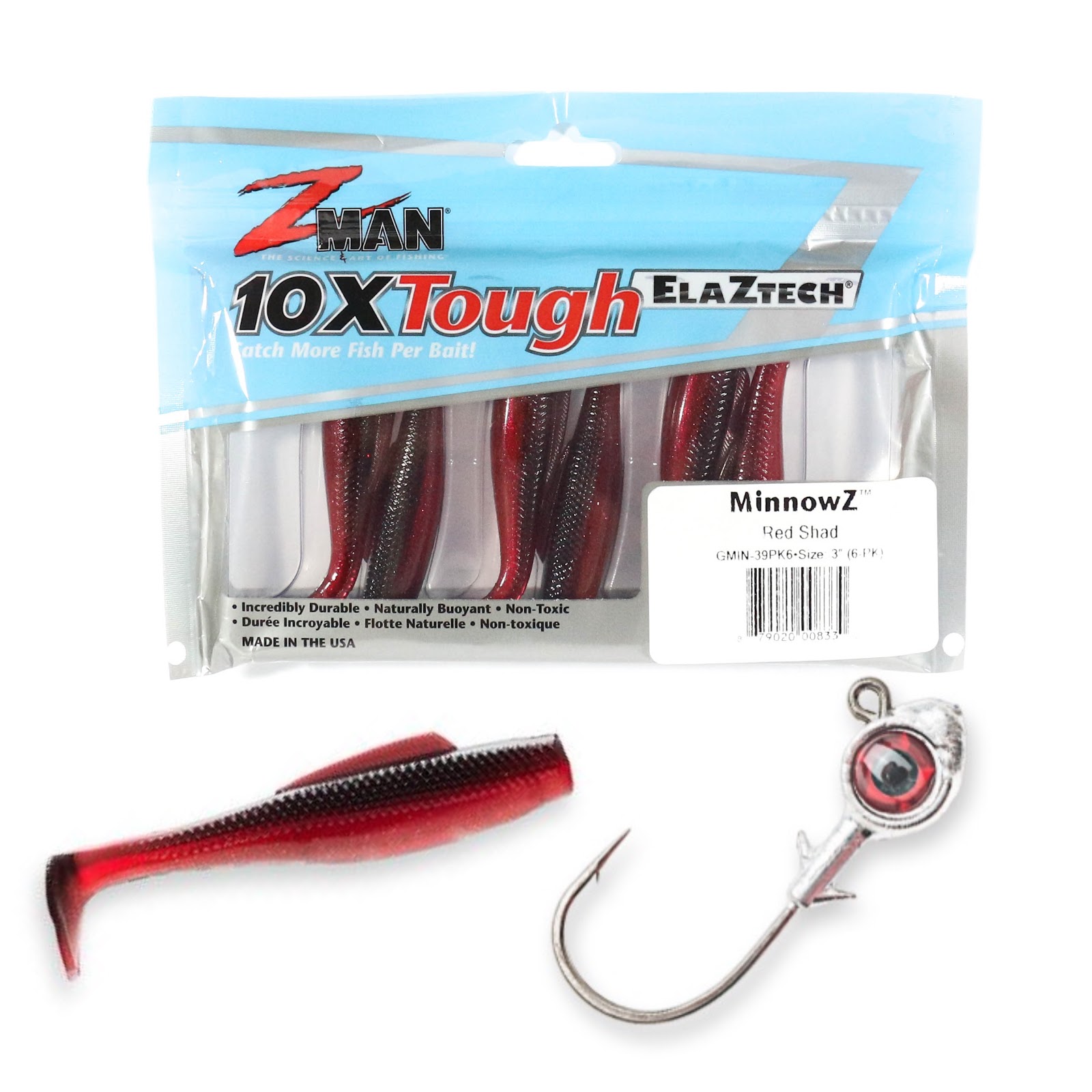 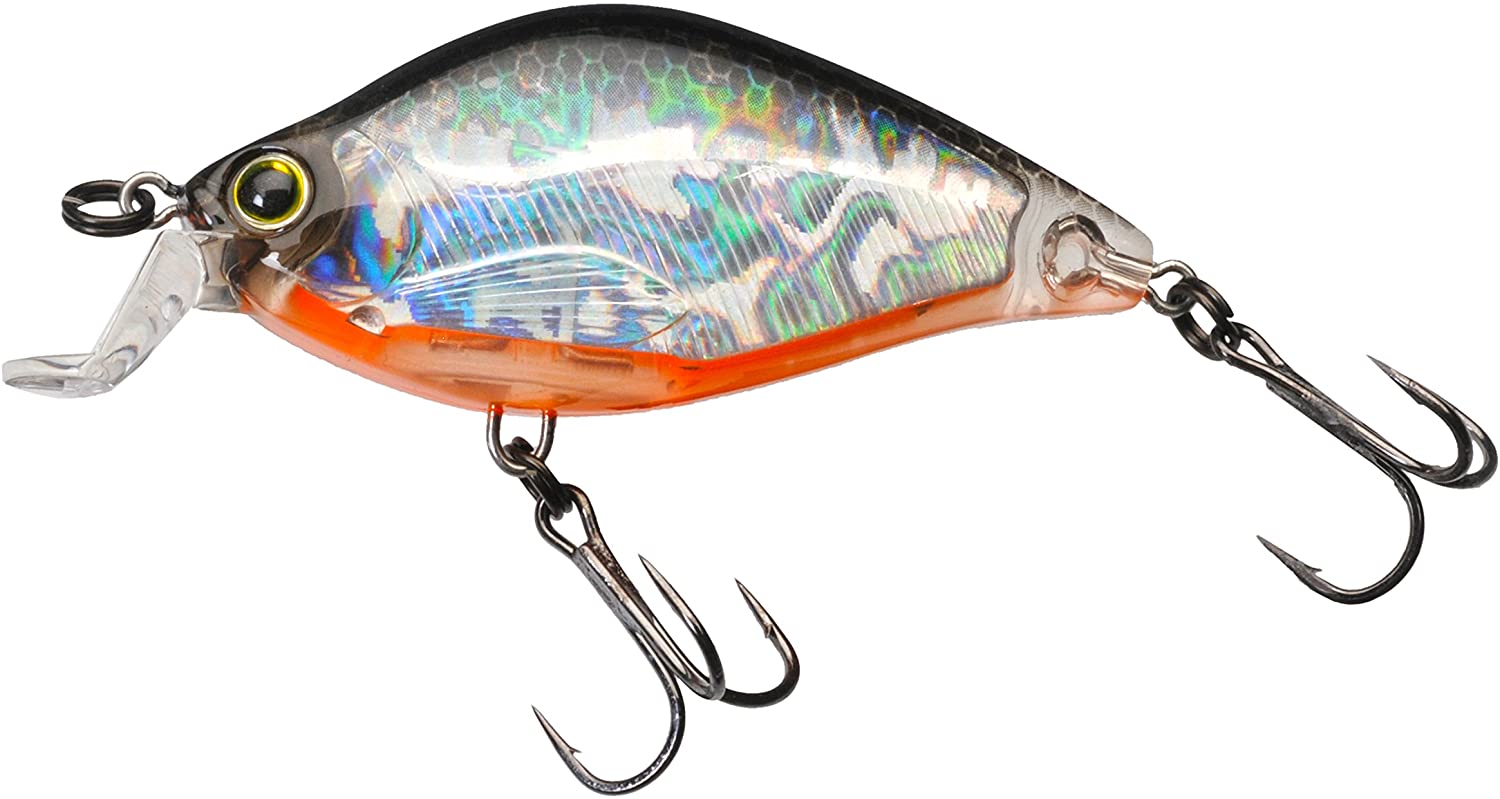 
We suggest using approximately three feet of 25 or 30 lbs fluorocarbon leader and tie most all of the lures mentioned above with a RFA angler loop knot to give those lures extra action! 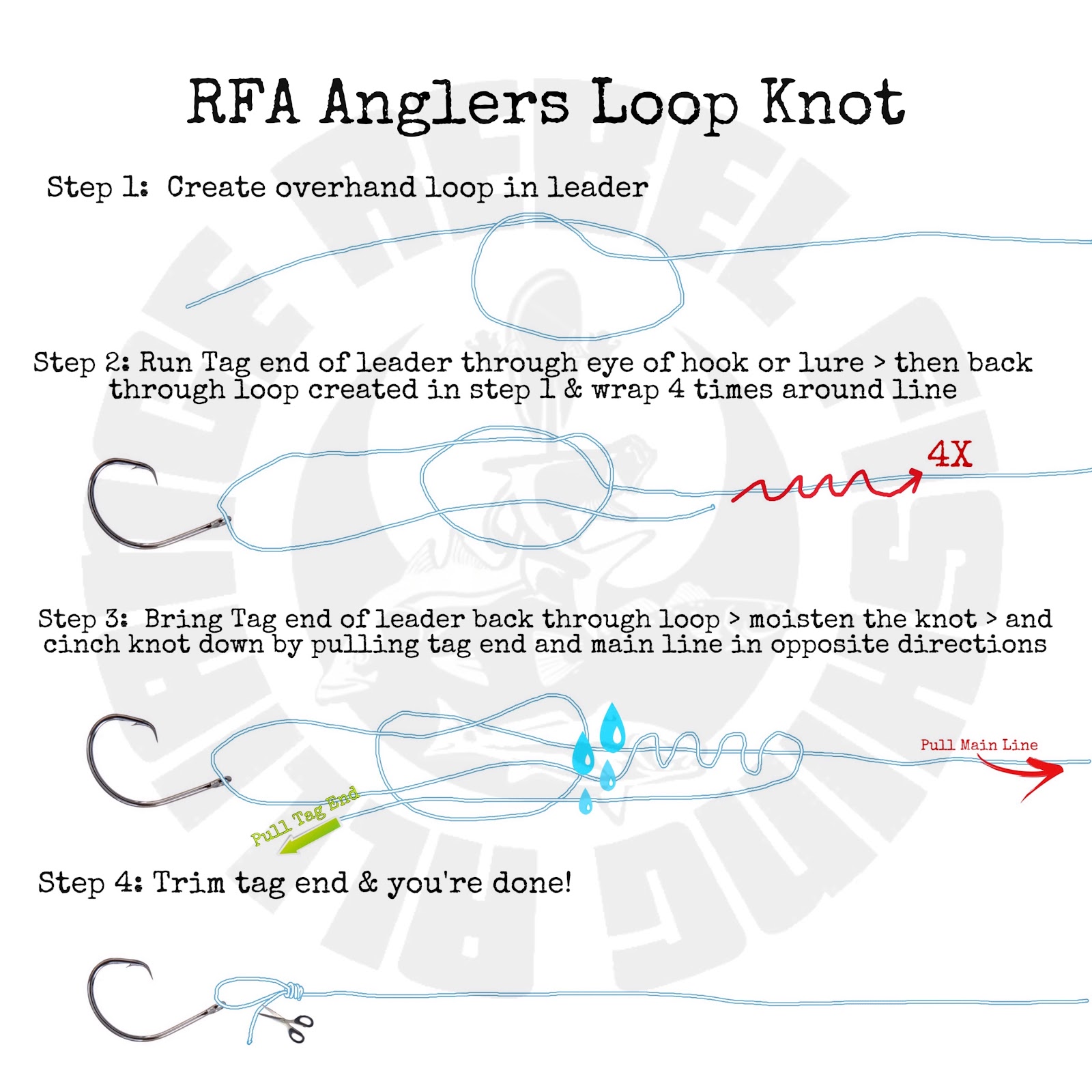 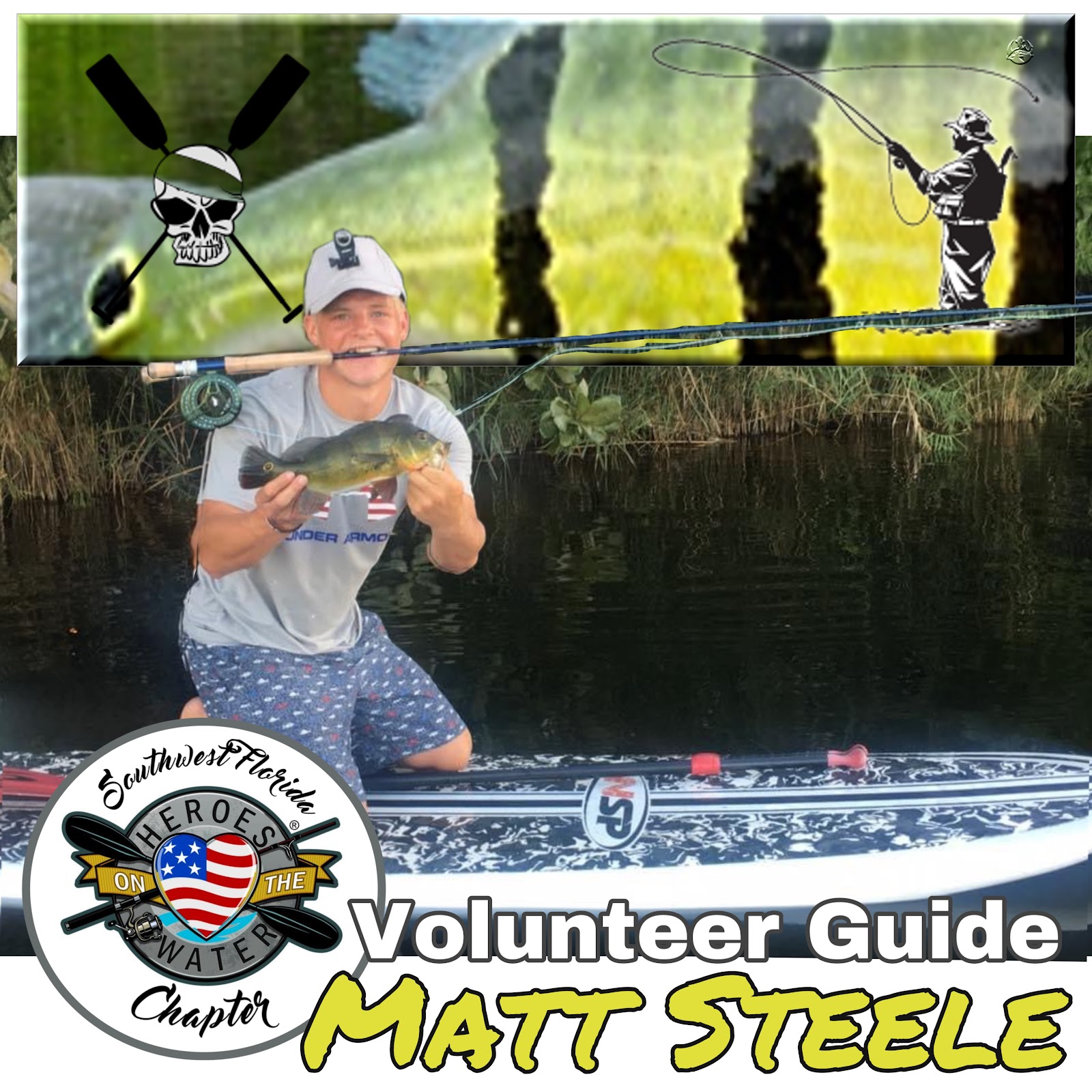 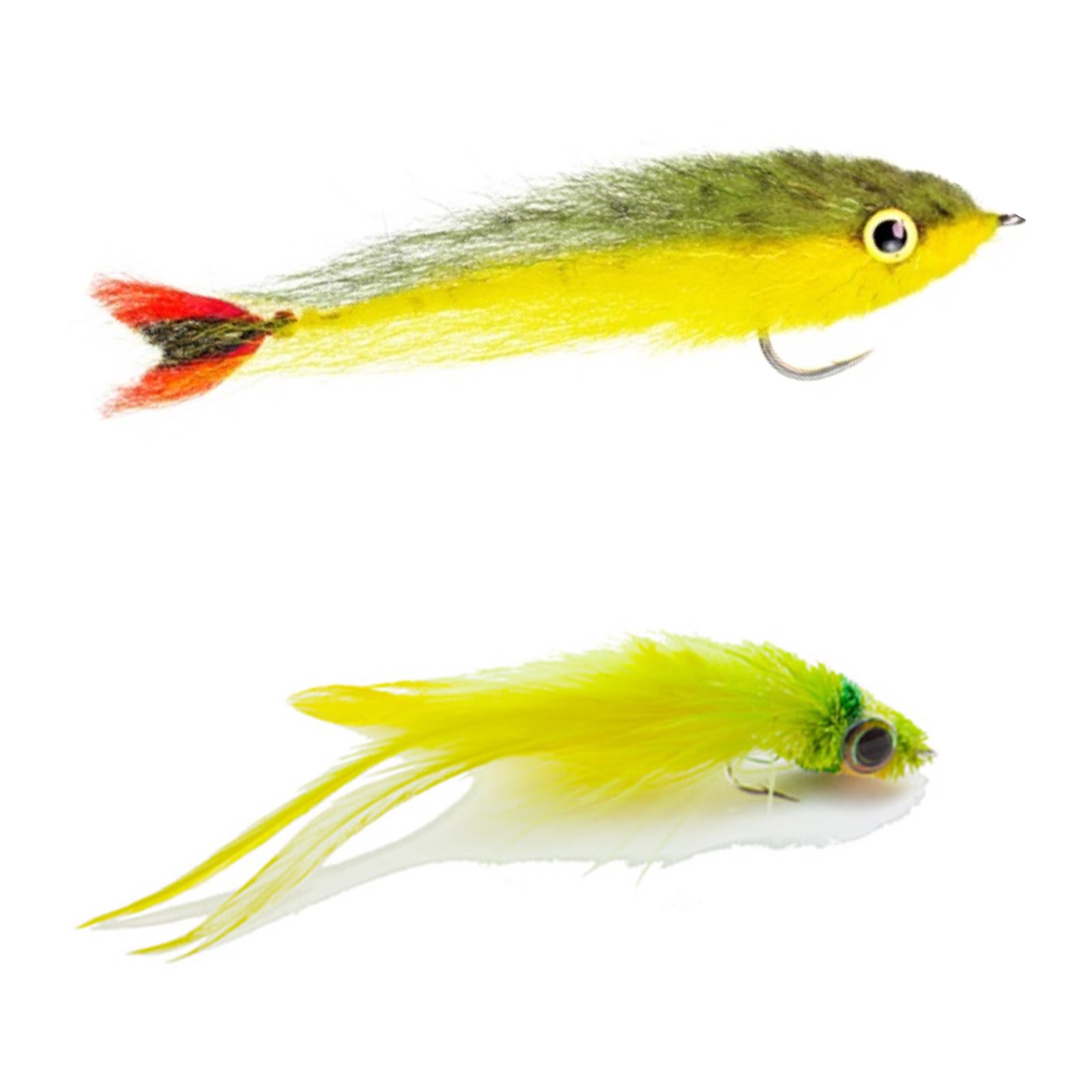 Rachel Amuso with a peacock bass - Cichla ocellaris caught from a canal in Collier County, FL.


Since peacock bass aren’t native to these waters, they have few natural predators and their population has exploded.  Almost any day you hit the water you can expect to catch double digit fish in the 1-3 lb range using live shiners. These smaller, juvenile fish tend to travel in big schools, so once you find them you can wear your arms out in just a couple hours. This is great for a family fishing day with kids or novice anglers. The real fun, and greater challenge here, is pursuing the larger adults in the 5-10 lb range. The bigger, mature fish tend to be found in smaller schools or even in pairs, so as an angler you'll sacrifice quantity for quality. They are ambush predators that respond to quick movements and erratic behavior, so twitch baits, top water, top water plugs, as well as spinner baits always work well. If you cast and retrieve these through a mess of old tree trunks or overtop an underwater ledge, or culvert drain pipe you will often get the response you are looking for. Poppers are always exciting, when cast towards thick weeds or overgrowth you can often entice a bigger fish to leave it's cover.  Seeing an aggressive pursuit hunter blow up on a top water is an awesome thrill to behold.  Once the hot Florida sun is overhead and things heat up the bigger fish tend to move to deeper water, so deep diving bomber lures become what you need to get into the strike zone.


Now that you know more about the cichla ocellaris or Peacock Bass, get out there and put these tactics and tackle in action!  May the fish be with you!